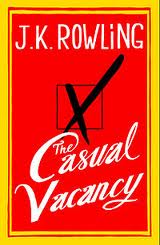 I recently tried to read the Casual Vacancy by JK Rowling.  I wasn’t expecting it to be like Harry Potter, since all the ads said that it was for adults and it was much different.  The problem was that I expected it to feel like Harry Potter.

In my opinion, Harry Potter was all things good in fiction.  The characters were likable and flawed, made good choices much of the time, and made me feel good toward humanity in general.  Even the characters I was most convinced were irredeemable (like Draco Malfoy) came though in the end, though it wasn’t hearts and flowers.  It felt real to me (the themes, not the magic… work with me here) and made me feel hopeful toward humanity.

A reviewer on Amazon summed up the Casual Vacancy best… it felt like watching the Jerry Springer show.  Not that I don’t love me some Jerry Springer, but I don’t watch the show for plot or meaning.  The Casual Vacancy was full of characters I didn’t really like, and there was no main character to even root for.  Some of them were interesting, but got lost in the mix and mush of all the other characters.  I need someone to identify with or root for, even if it’s a villain.  In this book, I just didn’t care.  I got a 3rd of the way into the book before I just decided that it wasn’t worth my time.  If it weren’t JK Rowling, I wouldn’t have given it that much of a chance.

Now, for the caveat.  The book was well-written and the characters were well-developed (though not likable… I can’t stress this enough).  I don’t like literary fiction, and that’s what this read like.  I like story… and plot… and characters.  So… If you like literary fiction, it might be worth a try.  If you care about a good, entertaining story, I wouldn’t bother.