I’ll start off spoiler-free, then warn you before I get there in case you don’t want me to tell you things. I get it.

I’m not usually into tearing down the creative work of others, and I’m not comfortable publicly bashing books I hate. Because maybe someone else loves it.

But I don’t feel like Netflix is going to worry too much about my opinion. And I adore Watership Down, by Richard Adams. I was so excited for the new animated series. I love James McAvoy. And I thought that John Boyega as Bigwig was going to be gold.

Whenever screenwriters adapt a book into a movie or TV series, things will have to change. It’s open to interpretation, and as two different mediums, they have different strengths. I get that.

For example (not a spoiler), they had more female characters in the Netflix version, and these female rabbits had some agency. In the book, they stuck more to the way rabbits in the wild act. Female rabbits having agency is fine and doesn’t have to change the story in a significant way. That was a good change.

I just feel like the screenwriters didn’t get the original book. And my reasons are all spoilers, either for the book or the series. You’ve been warned. Spoilers below the picture. 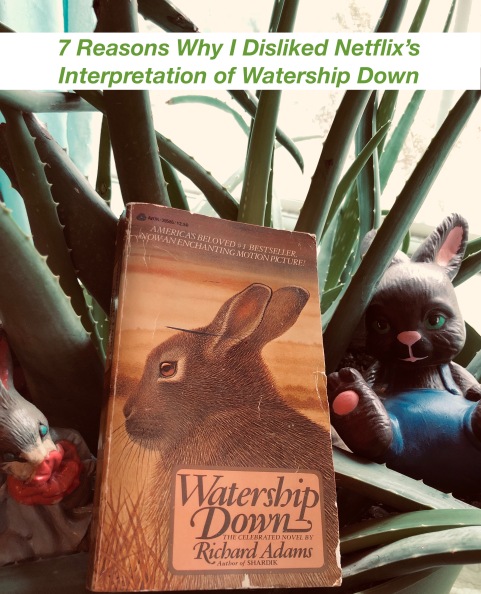 This could have been something amazing, and they totally missed the mark. I’m so sad about it, but the writers didn’t seem to understand the characters. I kind of wished I hadn’t watched it because it just made me sad and angry. I know movie versions of beloved books are often not as good, but it doesn’t usually make me feel like this.

Did you watch the Netflix series? What did you think?