Actually, even though the title of the post is to buy or not, that’s not really the question.  The question is whether to keep them once bought.

I’m a little bit of a hoarder.  I know people who change out their wardrobes seasonally, and have no trouble getting rid of old clothes, but I figure that if I buy it, I should keep it.

That’s why I have thousands of books.  Literally, thousands.

I try not to buy books.  I really try.  I use my local library for both ebooks and paper books.  But when I buy a book, I prefer to have the physical copy.

When I was attempting to shelve my huge collection, I started giving a lot of thought to clutter, and how much I hate it.  I started to really think about why I own so many books.  I haven’t read all of them.  Some of them were given to me by people who know I like books.  Some of them are well-loved books I’ve read a million times or might read again.  So, how do I decide which stay and which ones go?  I’ve made up a few rules.

If it has sentimental value.  My grandfather didn’t read many books, but he read and loved Marley and Me.  I enjoyed that book too, but even if I didn’t, I’d still own a copy.  It always makes me think of him.  And fairy tales make me think of my grandma.

If I’m going to re-read it.  I’ve read Watership Down more times than I can count.  So much so that I recently had to buy a new copy, as my old one was falling apart.  I love books that bear those kinds of marks of how well-loved they are.  My copy of Pride and Prejudice has post-it flags stuck in my favorite parts, so if I’m having a bad day, I can visit my favorite parts of the story and get a quick mood boost.

If it’s a classic.  I’m working my way through many of the classics, and even the ones I didn’t like, I’m keeping on my shelf.  I figure that it it’s stood up that much over the years, I may want to revisit it at a different point in my life.  I tried reading 1984 for the first time a few years ago, and though I recognized that it was a good book and I should like it, I just couldn’t stay interested.  Two years later, I picked it up and sped through it.  What’s going on in my life absolutely affects what I read and how I perceive it.

If it’s a “reference” book.  This is kind of a tricky one.  I write speculative fiction, so having books full of ghost stories, myths and legends, on my shelves is good practice.  I never know where I might find inspiration.

I haven’t read it yet, but I plan to.  I’m a sucker for used bookstores.  Sometimes I just have to pick something up because it looks good, but then I don’t get to it for awhile.  I’m okay with that.  But there are some books that I’ll probably never get to, and I need to learn to let them go.

These rules are flexible and subject to change.  But I’ve already taken two boxes of books to my local Half-Price books, and it feels good to know I’m reducing some of the clutter.

Do you buy books or get them from the library?  How do you decide which to keep and which to get rid of?

I finally finished 1984, by George Orwell.  While I wouldn’t say it’s an easy read, it is an interesting one.  It took me about two weeks to get through, and that’s mostly because it’s not a book I particularly wanted to read in order to “relax.”  Some classics have nice language, but are boring stories.  This book has an interesting story and is well written.  There are times it’s either more or less interesting, but overall, it’s a book I recommend reading, at least once.

I talked a few days ago about my thoughts on how scary the society’s attitude toward language is, so I won’t return to that.  The book had a fast paced plot with accessible language and good writing.  The problem with the book is that the subject matter is too weighty to read it primarily for relaxation.  Last time I read it, for whatever reason, I had to force myself, and I lost interest halfway through.  This time, though I read it from the beginning, it kept me pretty riveted.

I believe that this book is timeless because it deals with concepts and ideas, a reality that could happen, rather than events.  Yes, the book is laid out in a dystopian future (published in 1949, it was the future), but the book isn’t primarily about the plot.  This an extreme example of where society could go.  It’s an extreme example of losing one’s humanity.  If you’re controlled, suppressed, made to think and act a certain way, you lose humanity.  Throughout the book, whenever they talked about the “lower classes,” the Proles, I thought, “Well, can’t he (the main character) just go be a Prole?  That’s what I’d rather do.”  The thought of being watched and controlled is intolerable to me.

What scares me most about this book is that I see little things happening here and there.  From the beginning, I’ve said that I’d rather be less secure on an airplane than go through so much security.  I’d rather be less safe than know the NSA is watching and listening.  I’m okay with life’s uncertainty.  In theory, what’s going on isn’t so bad.  But where does it stop?  If our rights erode a little bit at a time, how long will it take before they’re gone?

These are my questions… I’m unfortunately not political enough to have good answers.  I want freedom to think and act and be as I choose.  Our system of government evolved so that certain people could represent the rest of use.  But are they representing us anymore?

The sad truth is that those in power will always want more power.  And they get it by saying it’s for our own good, something that sounds good enough at first that those of us who just want to live our lives will buy it.  At first.

Read 1984.  Discuss it with people.  It’s a good book whether you look at it as purely a work of fiction, as a warning, or a reality.

I tried to read George Orwell’s 1984 once before, and I couldn’t get into it.  I don’t know why I picked it back up a few days ago, but it called to me.  I’m enjoying it much more this time around, and the concepts in it are really making my brain work.

I’m only about 75 pages in, but I’m going to discuss concepts from the book, so if you’re not familiar with it or don’t want me to ruin it, stop reading now.

Still with me?  Good.  Today I was reading the part where Syme excitedly discusses with Winston (the narrator) about the destruction of words.  NewSpeak, the official language of Oceana, is all about decreasing the number of words.  After all, Syme explains, if you have fewer words, it’s harder to commit ThoughtCrime.  If you have fewer words to work with, it’s harder to think for yourself.  Why have words like terrible, awful, rotten, evil, or bad, when you can just say ungood?  Why have wonderful, amazing, beautiful, astounding or lovely when you can just say good, plusgood, or double plusgood?  After all, isn’t it more precise to use those words than other ones that have shades of meaning instead of just one?

What a terrifying concept!  Words naturally evolve, and certain words go out of fashion, seldom used.  Betwixt has outgrown its usefulness, as has fortnight and mayhap.  But the words aren’t banned; they still exist.  I can use them if I want to.  I can look them up, write them down.  I’ve read those words in old speeches and historical romance novels.

In Oceana, the act of writing something on paper is subversive.  Having thoughts of your own is subversive.  I can write in my journal everyday, or not at all.  I can blog about anything.  Phil Robertson can say what he wants about religion and gay people, and no one will arrest him.  People will argue about it on Facebook and Twitter, in person and by posting memes.  Some support him, some are against him, and others don’t care.  But every person arguing a point has the right to do so.  No one will arrest anyone on any side of the argument.

The bleakness of Oceana is it’s least terrifying feature.  The poverty and hopelessness are nowhere near as depressing as Big Brother controlling speech and thereby trying to control thought.  Syme further talks about taking the classics and changing them into something acceptable, and once they’re changed, they won’t be anything like the original.  His thought process is perfectly logical, presented reasonably, and utterly maddening to me.

I am anti-censorship.  I support the right of people to present vulgarity as art or entertainment, because who am I to judge?  Freedom means freedom; not just freedom for what I approve of.  The only censorship I believe in is the right for parents to censor what their children watch/ read, and my right to choose, turn off the channel, ignore.  Yes, there are things I dislike, but once censorship starts, where does it stop?  People should be informed about what they read and watch, but then have the right to choose what they like and what they don’t.  I don’t have cable.  I don’t want to pay for Jersey Shore and Desperate Housewives, Honey Boo Boo, or Toddlers and Tiaras.  So I don’t.  I have Netflix, not cable.  That’s my choice, and if you want to watch any of those shows, that’s yours.  We both have rights.

I’ll take the right to think and speak and produce art in any form I choose over any type of outside censorship.  If I don’t want to be controlled, then I don’t have the right to control others.

What’s wonderful about all this is that you have the right to agree or disagree with anything (or everything) I’ve said.  I’d love to hear your thoughts in the comments. 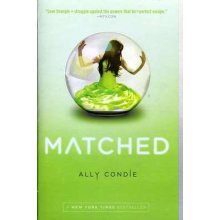 Matched, by Ally Condie, is a 1984-esque novel set in a dystopian, communist type future.  Everyone is equal and has their basic needs met.  No one gets choices.  On the 15th of the month after your 16th birthday, you receive your Match, the person you will spend the rest of your life with, and you start the courting process.  Everything is laid out for you.  It’s safe.  And right.

Cassia is excited about her Match, until she gets a brief glimpse of a different match.  Officials tell her that it’s an error, but she starts to question everything she knows about her life and how “right” it is.

Matched is book 1 of 3, and though it starts off feeling a little to saccharine for my taste, it quickly becomes a more thinking type novel.  At various points when Cassia had to make decisions, I found myself asking myself what I would do in the same situation.

This is a great book to read alone or to read with a group for discussion.  Two thumbs way up, and I can’t wait to read the next ones.