In real life, death often feels meaningless. People we love die, and we know that the world would have been a better place if they were still with us. The death of a loved one is painful and life-changing for those left behind.

In fiction (books, movies, or TV), death should serve a purpose. We get close to those characters, in some cases understanding them better than we do people in real life. We see them when they brush their teeth, eavesdrop on their phone conversations. We see the face they project to the world and the things they try to hide.

In good fiction, we become connected to characters. Their deaths can be heart wrenching.

I think it’s important that writers are never arbitrary in their choices, just killing off a character because they couldn’t figure out how to move the plot forward or for ratings.

From this point forward, I’m going to talk about the Harry Potter books and The Walking Dead Season 8, Episodes 8 & 9. There will be spoilers. You’ve been warned. 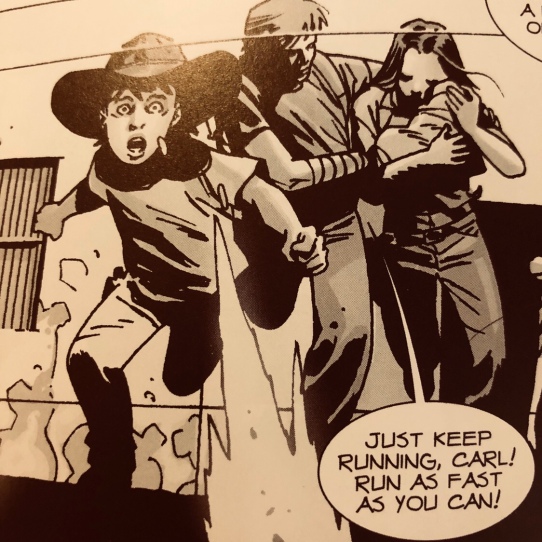 Especially in Harry Potter and The Deathly Hallows, JK Rowling kills off some important characters, but I would argue that they’re almost all necessary.

I cried when Hedwig and Dobby died. But after I got over my denial and anger, when I looked at those deaths as a writer, I realized they were necessary. Harry needed to understand that there was always going to be a price. It’s not like in the movies, where the heroes don’t take a single bullet, but the bad guys all get wiped out (I do love those movies though, BTW). Bad things happen to good people (and owls and house elves), and the survivors are left with a giant hole where their loved ones were.

When Dumbledore died in Harry Potter and The Half-Blood Prince, it had to happen. It was inevitable. The mentor in a hero story always has to die in order for the hero to be truly heroic. Did I love it? No. But did it serve an important purpose? Yes.

JK Rowling understands when it’s important to kill characters, and when it’s not. Case in point, she was going to kill Arthur Weasley, but realized it didn’t serve the story, so she backed off.

In episode 8.8 of The Walking Dead, they made it clear that Carl was going to die. While I wasn’t happy about it, it wasn’t Daryl, Michonne, or Rick, so I thought it would be okay. I thought I was ready for it.

But as I watched episode 8.9, with Carl dying, I realized that it wasn’t okay. There was no good reason for him to die. We first met him 8 years ago as a little kid who got himself into bad situations and needed to be rescued/ protected from zombies… excuse me… walkers. Then he started shaping up into a little sociopath, and that was interesting to watch. But when he grew up and emerged from those two identities, he became a badass. He was this thoughtful 18 year old who could stare down death, shoot a bad guy without blinking, and still want to save a guy who was living alone.

And yet he died because he was bitten by a walker during an ordinary killing of just a few of them.

Carl symbolized hope in the group. He survived so much, and was the obvious leader of the group after Rick and Michonne. And then the writers killed him. Probably for ratings.

This fan art, I think embodies everything all of us feel about Carl. It’s how it was supposed to be.

The actor playing Carl, Chandler Riggs, didn’t want to leave the series. Carl’s death serves no greater purpose in the story. Sure, his dying wish was for Rick to be a leader who could accept Negan’s people instead of killing them all. But there are so many other ways to accomplish this! Carl could have had a talk with Rick and reminded him that they integrated Woodbury’s people after the attack. Rick could have listened to Morgan or Jesus or Maggie. But no, they killed Carl.

One could argue that Judith or Maggie’s child is the hope for the future, but while cute, I’m not invested in Judith. It will be years before either of them could be a viable leader. So… no.

Honestly, it was a good episode. Maybe even one of the best recent episodes. But I think they killed the series.

I’ve stuck with The Walking Dead and loved it despite its flaws, even when everyone else said it was going downhill. Despite the fact that the writers can’t seem to come up with anything but this dragged out conflict with Neegan, I was still all in. But now? It’s not that I’m going to stop watching on purpose. But I fully expect that one day, I’m just going to forget that there’s a new episode. Or, instead of waiting for it breathlessly, I might find other things to do.

And that will be that.