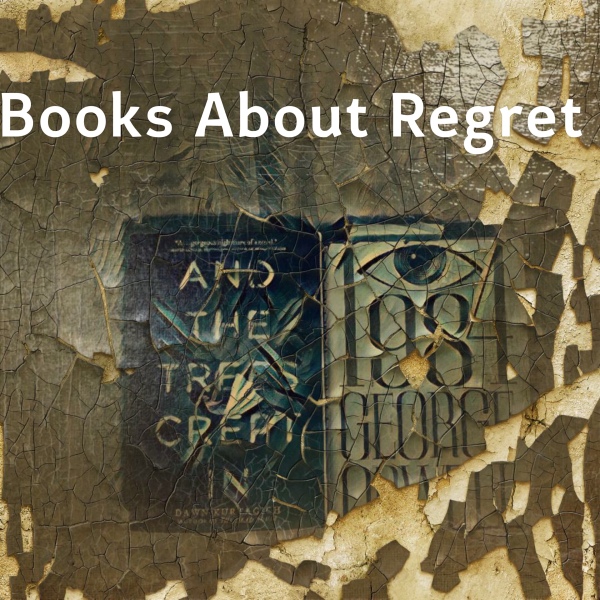 We’ve all done things that we regret. I don’t think you can get through life without at least a few. But in some books, regret is an underlying theme that’s so strong it’s almost another character. These are a few of those books.

And The Trees Crept In, by Dawn Kurtagich (YA horror): The first time I read this book, I had no idea what was going on, but in the best possible way. It’s told in odd formats, with straightforward text and journal entries. Some parts didn’t entirely make sense, but I went with it and ended up loving the payoff. Silla is an unreliable narrator, and it’s clear she’s regretful about something, but what isn’t clear until the end.

Artemis, by Andy Weir (science fiction): While I didn’t think Artemis was as good as The Martian, I still really enjoyed it. Jasmine is an honest smuggler who gets involved in a huge conspiracy. Throughout the book, she mentions that she needs to make a particular amount of money, and it’s clear that there’s something she wants to make amends for. It was telegraphed pretty well long before the ending, but there were enough surprises along the way to make it an enjoyable ride.

1984, by George Orwell (literary): Winston has purchased an illegal diary and wants to write his thoughts but is consumed by guilt and worry that he’ll be found out. As his rebellion grows, he continues to feel guilty about what he’s doing. The ending is a masterpiece with the Thought Police manipulating him and then using his feelings of regret to keep him prisoner. It’s terrifying.

What are your favorite books about regret?

I finally finished 1984, by George Orwell.  While I wouldn’t say it’s an easy read, it is an interesting one.  It took me about two weeks to get through, and that’s mostly because it’s not a book I particularly wanted to read in order to “relax.”  Some classics have nice language, but are boring stories.  This book has an interesting story and is well written.  There are times it’s either more or less interesting, but overall, it’s a book I recommend reading, at least once.

I talked a few days ago about my thoughts on how scary the society’s attitude toward language is, so I won’t return to that.  The book had a fast paced plot with accessible language and good writing.  The problem with the book is that the subject matter is too weighty to read it primarily for relaxation.  Last time I read it, for whatever reason, I had to force myself, and I lost interest halfway through.  This time, though I read it from the beginning, it kept me pretty riveted.

I believe that this book is timeless because it deals with concepts and ideas, a reality that could happen, rather than events.  Yes, the book is laid out in a dystopian future (published in 1949, it was the future), but the book isn’t primarily about the plot.  This an extreme example of where society could go.  It’s an extreme example of losing one’s humanity.  If you’re controlled, suppressed, made to think and act a certain way, you lose humanity.  Throughout the book, whenever they talked about the “lower classes,” the Proles, I thought, “Well, can’t he (the main character) just go be a Prole?  That’s what I’d rather do.”  The thought of being watched and controlled is intolerable to me.

What scares me most about this book is that I see little things happening here and there.  From the beginning, I’ve said that I’d rather be less secure on an airplane than go through so much security.  I’d rather be less safe than know the NSA is watching and listening.  I’m okay with life’s uncertainty.  In theory, what’s going on isn’t so bad.  But where does it stop?  If our rights erode a little bit at a time, how long will it take before they’re gone?

These are my questions… I’m unfortunately not political enough to have good answers.  I want freedom to think and act and be as I choose.  Our system of government evolved so that certain people could represent the rest of use.  But are they representing us anymore?

The sad truth is that those in power will always want more power.  And they get it by saying it’s for our own good, something that sounds good enough at first that those of us who just want to live our lives will buy it.  At first.

Read 1984.  Discuss it with people.  It’s a good book whether you look at it as purely a work of fiction, as a warning, or a reality.

I tried to read George Orwell’s 1984 once before, and I couldn’t get into it.  I don’t know why I picked it back up a few days ago, but it called to me.  I’m enjoying it much more this time around, and the concepts in it are really making my brain work.

I’m only about 75 pages in, but I’m going to discuss concepts from the book, so if you’re not familiar with it or don’t want me to ruin it, stop reading now.

Still with me?  Good.  Today I was reading the part where Syme excitedly discusses with Winston (the narrator) about the destruction of words.  NewSpeak, the official language of Oceana, is all about decreasing the number of words.  After all, Syme explains, if you have fewer words, it’s harder to commit ThoughtCrime.  If you have fewer words to work with, it’s harder to think for yourself.  Why have words like terrible, awful, rotten, evil, or bad, when you can just say ungood?  Why have wonderful, amazing, beautiful, astounding or lovely when you can just say good, plusgood, or double plusgood?  After all, isn’t it more precise to use those words than other ones that have shades of meaning instead of just one?

What a terrifying concept!  Words naturally evolve, and certain words go out of fashion, seldom used.  Betwixt has outgrown its usefulness, as has fortnight and mayhap.  But the words aren’t banned; they still exist.  I can use them if I want to.  I can look them up, write them down.  I’ve read those words in old speeches and historical romance novels.

In Oceana, the act of writing something on paper is subversive.  Having thoughts of your own is subversive.  I can write in my journal everyday, or not at all.  I can blog about anything.  Phil Robertson can say what he wants about religion and gay people, and no one will arrest him.  People will argue about it on Facebook and Twitter, in person and by posting memes.  Some support him, some are against him, and others don’t care.  But every person arguing a point has the right to do so.  No one will arrest anyone on any side of the argument.

The bleakness of Oceana is it’s least terrifying feature.  The poverty and hopelessness are nowhere near as depressing as Big Brother controlling speech and thereby trying to control thought.  Syme further talks about taking the classics and changing them into something acceptable, and once they’re changed, they won’t be anything like the original.  His thought process is perfectly logical, presented reasonably, and utterly maddening to me.

I am anti-censorship.  I support the right of people to present vulgarity as art or entertainment, because who am I to judge?  Freedom means freedom; not just freedom for what I approve of.  The only censorship I believe in is the right for parents to censor what their children watch/ read, and my right to choose, turn off the channel, ignore.  Yes, there are things I dislike, but once censorship starts, where does it stop?  People should be informed about what they read and watch, but then have the right to choose what they like and what they don’t.  I don’t have cable.  I don’t want to pay for Jersey Shore and Desperate Housewives, Honey Boo Boo, or Toddlers and Tiaras.  So I don’t.  I have Netflix, not cable.  That’s my choice, and if you want to watch any of those shows, that’s yours.  We both have rights.

I’ll take the right to think and speak and produce art in any form I choose over any type of outside censorship.  If I don’t want to be controlled, then I don’t have the right to control others.

What’s wonderful about all this is that you have the right to agree or disagree with anything (or everything) I’ve said.  I’d love to hear your thoughts in the comments.

In Hollywood today, there aren’t many great stories.  I love a good blow ’em up type movie with lots of car chases and swear words, but those can only be done and redone so many times.  I’m a fan of movies that make me think, even if I don’t necessarily like the movie.

Filmbalaya recently did a great blog on the “25 movies that could blow you away in the second half of 2011”.  Here’s a link to that website.

1.  Red State (2011)–  I’m normally a Kevin Smith fan, and while I didn’t like this movie much, it really did make me think.  I didn’t hate it and have the urge to turn it off; it’s just that when it was over, I was left with more questions than answers.  That’s not necessarily a bad thing.  I recommend watching it at least once.

2.  Inception (2010)– This was a twisty turny thinking movie if I ever saw one.  I didn’t think I liked this movie when I was done, and I actually had to go on other sites and read various interpretations of the movie.  If you haven’t seen it, this is one to watch with a group of friends and to debate and discuss over a bottle of wine afterward.

4.  The Dark Knight (2008)- Yes, I know it’s a Batman movie.  However, it’s dark and says a lot about human psychology.  It’s a fascinating look at the human mind, and why no matter how far we come as a society (or don’t), the only predictable thing about human nature is that it is unpredictable.

5.  Forks Over Knives (2011)- This is a documentary about food and how maybe science knows more about curing disease than we think.  I promise you, pharmaceutical companies don’t want you to see this one.

6.  Food, Inc.(2008)- I delayed watching this one for a really long time, and I was right to do so.  I cried through it and had to stop because I got nauseated more than once.  If you want to know where your food comes from and the control that you have over the food industry, and that the food industry has over you, watch this movie.

7.  Fight Club (1999)- Again, this is another movie that explores human psychology, and more than that, group mentalities.  I recommend both the book and the movie, but the movie does a good job of staying true to what made the book great.

8.  One Flew Over the Cuckoo’s Nest (1975)-  A guy arrives at a mental institution and breaks all the rules.  It’s an interesting look at institutionalization.  Again, the book is better, but the movie has Jack Nicholson, so it’s worth watching.

9.  Taxi Driver (1976)- Robert DeNiro plays a taxi driver who starts mentally breaking down.  He becomes obsessed with a young prostitute and takes action.  The ending is discussion worthy, and makes me wonder if this could happen.

10.  Basic (2003)-  A washed up military investigator is called into a base to figure out why several men on a mission disappeared.  But that’s only the tip of the iceberg.  The story gets more complex and convoluted as it goes on, but the ending is worth the journey.