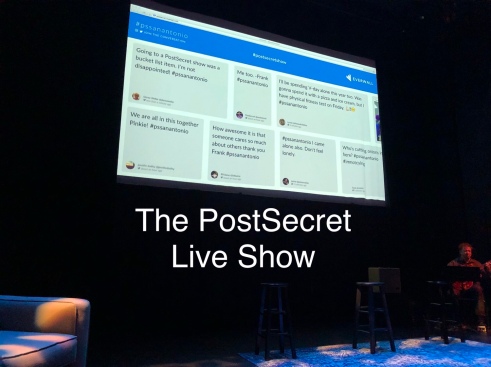 I don’t even remember how I fell in love with PostSecret. I think someone mentioned it to me, and I checked it out. It’s not part of my routine to check the Sunday Secrets. I own all the books.

When I went to Virginia to visit my in-laws a few years ago, the only thing I wanted to do was go to the PostSecret exhibit at the Postal Museum.

In case you have no idea what I’m talking about, PostSecret was started by Frank Warren in 2005 as an art project. He gave out postcards and asked people to write a secret on them. His goal was to get 365 postcards. He got way more than that.

He started posting secrets he received on his blog. They update every Sunday (hence, Sunday secrets). I enjoy reading the secrets, and I keep a folder of my favorites to use as writing prompts.

I’ve never made it to a PostSecret Live show. I’ve always wanted to, but it seemed that every time one came to town, I already had a prior commitment, or I was going to be somewhere else.

I finally made it this past Tuesday.

When I got there, I realized that I hadn’t known what to expect. I didn’t have any expectations of it, but to me, that was part of the fun.

We were set up in a small theater in San Antonio. The show started with three actors speaking various “secrets” as if they were their own. Their voices broke with laughter or tears. It was powerful.

They flashed secrets on the screen. At the intermission, they encouraged people to tweet about PS #pssantonio, then they flashed tweets with the hashtag on the screen. In the ladies’ room, they had post-it notes and pens. Women wrote on the post-its and put them up on the mirror.

They also had postcards for people two write on, then after break, the actors read the secrets of people in the audience. Then more acting and secrets on screen. 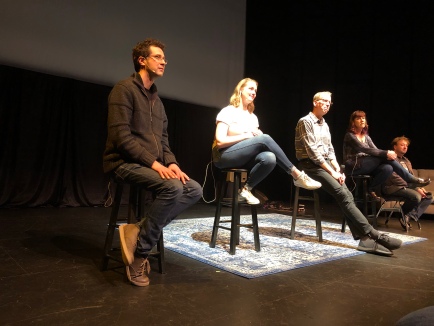 As a finale, they had a Q&A with Frank Warren and with the actors. After that, a book signing where I got to meet the man behind it all.

Frank Warren never intended for PostSecret to become a national phenomena. But I think that it speaks to the fact that people want to make connections with one another. Our secrets isolate us, but they don’t have to. As Frank said, any secret anyone has is shared by someone else.

I always love live events because the emotion in the room changes the event. In this case, I heard people laugh, gasp, or go hushed after various secrets were read. People cried, and no one cared because others were crying too.

This was a bucket list item for me, and I wasn’t disappointed. 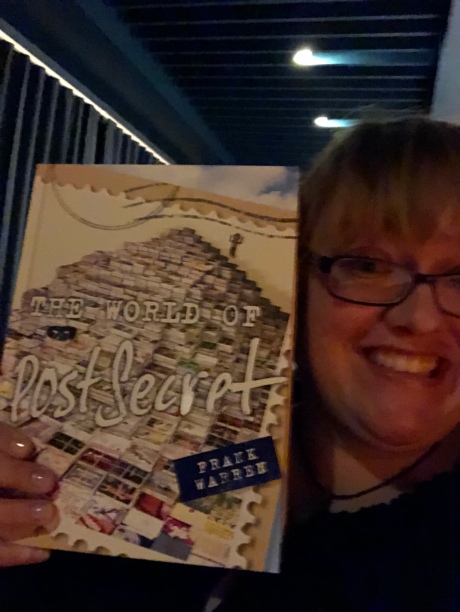 I used to be dismissive of self-help books. But then, my first year in grad school, we were assigned to find ten self-help books that we might use as a therapist. So, one day, I drug myself over to the local Barnes and Noble. With a notebook in hand, I started taking apart their self-help section.

There are a lot of goofy, unhelpful self-help books out there. That being said, what helps everyone is individual. I don’t personally know anyone who managed a true mental health issue (like depression or anxiety) through reading self-help books alone, but I do know that they can be a helpful tool in an overall wellness toolbox.

Are there any books you’d add to the list?

Not long ago, I clicked “like” on a Facebook page called Humans of New York.  Brandon decided one day to start taking pictures of people in New York, and eventually started asking them questions and including quotes and short portions of their stories.

Some of the stories are funny, some heartbreaking, some inspirational.  But it’s not the stories that really capture my attention; it’s the comments.  Most of the comments are supportive, offering love and acceptance.  The internet can be a really mean place, but it can also be a beautiful, supportive place.

The project reminds me of PostSecret, where people send in post cards anonymously with secrets written on them.

One of the themes I heard most often in therapy is that people want to make connections with other people; the problem is that they often don’t know how.  It seems like it should be easy.  After all, most of the photos on the Humans of New York Facebook page get between 80,000 and 350,000 likes.  They get tens of thousands of comments.  People want to love and support others, but I guess we don’t know how, without the distancing tool of the internet.

One woman who told her story, that she left an abusive relationship, has Hepatitis C, and wanted to place her daughter for adoption so that she’d be in a a better situation, but then couldn’t go through with it.  There was such an outpouring of love and support for her that Brandon set up an email address to try to connect her with services.

This is the truest side of mankind.  I believe that.  The truth doesn’t show up in the news with all the racial, political, sexist, hateful, violent stuff.  The truth is strangers are willing to help a woman on the other side of the world.

When we pass by homeless people asking for food or money, we look at them and see what we’ve been told to see.  Drug addicts.  Liars.  Lazy people.  The truth is much more complicated, and it’s hard to maintain that disinterest and vague feeling of being better than when we know their stories.  Because everyone has a story, and if we hear their stories, we can connect with them.

Next time you find yourself judging someone, I urge you to stop and wonder what their story is.  What would put them in the situation they’re in?  I would rather err on the side of believing a lie than judging someone too harshly.  After all, we’ve all made mistakes.  We’ve all done things we’re ashamed of.  Compassion, empathy, and love show the truest parts of who we are. 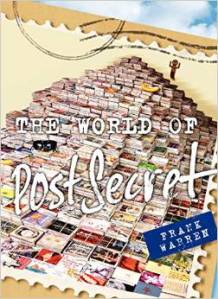 By now, I pretty much assume everyone in the world is familiar with PostSecret.  For those of you who aren’t, it started as an art project, where Frank Warren had people send him postcards with secrets written on them.  He wanted 365, and years later, has had millions come to him.  PostSecret has raised money for suicide awareness and the Hopeline.  Many of the secrets are heartbreaking, but almost as many are uplifting.

In our social media- celebrity obsessed- selfie world, this seems honest in a way that other forms of transparency don’t.  Thanks to Facebook, I know what people had for breakfast and where they went on Saturday.  I get to see their latest pictures and know their hobbies, especially if they workout or run.  But I don’t know their hopes and dreams.  I don’t know what keeps them awake at 2 a.m. or if they’ve found true love.  I don’t know if they cry at Hallmark commercials or sneak cigarettes when no one is looking.  I don’t know that I need to know these things.  After all, everyone has secrets, and if we were all to post only the truth on social media, I’m not sure if that would make the world a better place, or just a sadder one.

PostSecret though, is a way for people to tell their secrets anonymously.  I wonder if I’ve known anyone who’s had their secret posted online.  I feel connected to a community of people.  Sometimes I see secrets and think, “Oh, you too?  That could have been my secret.”  Sometimes I just want to give the writer a big hug.  And sometimes I want to smack them.  Secrets are as different as the people who write them.

I guess I love PostSecrets for their honesty, and I appreciate the anonymity.  I try not to be judgmental, but I honestly struggle with it when people come out with too much information in a non-anonymous forum.  I think that people who participate in reality shows are idiots.  But when it’s anonymous like this, I just feel like it’s brave.  Maybe it’s because people on reality shows or who post certain things on Facebook just seem attention seeking.  Whereas writing a PostSecret isn’t attention seeking; the people behind them are just looking to connect.

The new PostSecret book just came out, and I’m excited to see if Santa bought it for me.  😉