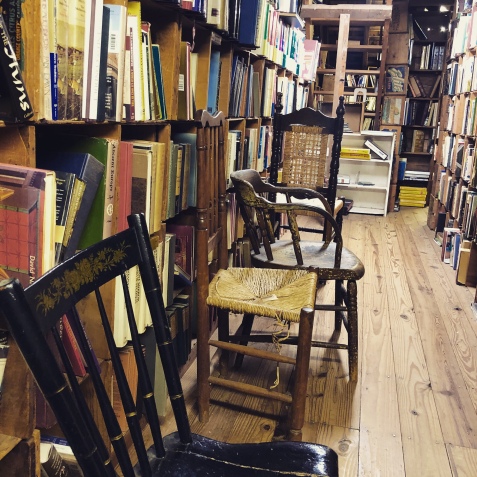 I was looking at the books I’ve read on Goodreads the other day, and I realized that my feed is a sea of 3, 4, and 5 star ratings. It gave me pause as I wondered if I’m too easily entertained.

5 stars: It was amazing.

4 stars: I really liked it.

And then it hit me… if I’ve finished a book, I at least liked it enough to give it 2.5 stars, which rounds up to 3. Anything below that, I don’t finish. In rare cases, I may hold out hope that the book will improve, or if I really like the author, I may give them way more of a chance than I would a relatively unknown.

That being said, I most often read two and one star reviews on Goodreads to see if I think I’ll like the book. Often, the negative reviews are more helpful for me in choosing a book than the positive ones.

If the flaws are something I can live with, I go for it. If I think those flaws will irritate me as much as the rater, I’m out.

Do you follow a rating system for books? Is it different than the one Goodread’s suggests?

I recently started a book I couldn’t finish because it was so over the top disgusting and ended up having “on-screen” violence toward a cat. Now, to be fair, I knew it was going to be gruesome. Even without reading the back cover, it’s clearly going to have zombies or cannibalism or something, all of which I’m fine with. I’m even fine with blood and gore. But when it’s grossness just to be gross, it doesn’t seem like horror to me. It almost seems like a little kid saying naughty words for shock factor. That being said, I’d actually started to like this book before the thing with the cat, and had high hopes for it as a YA horror.

But violence toward animals is an automatic pass for me. Even though I was over 50 pages in, I put it down with no regrets.

It’s rare for me to give a book 1 star on Goodreads. According to their rating system, 1 star means “did not like it.” And why would I finish a book I don’t like? In general, I’ll put a book down as soon as I realize I’m not into it. That doesn’t mean it’s a bad book. Lots of people loved The Goldfinch, and I was bored out of my mind.

There are plenty of books that I haven’t loved, but kept pushing through and was glad I did. Outlander comes to mind. The first 100 pages are slow and pretty boring. But once I was past that, it flew by (if an 850 page book can be said to “fly”).

John Irving’s books tend to feel slow, but when I get to the end and it all comes together, I’m so glad I read them, because wow.

In both cases, with John Irving’s books and with Outlander, I pushed through the boredom because I had recommendations from people I trusted. Plus, there was no animal cruelty, which is pretty much non-negotiable for me.

So, to sum up, I hated this book, would actively tell people not to read it, for the reasons I mentioned. I took a look at the reviews of this book on Goodreads, and it ends up with a 3.55 rating. It has plenty of 5 star reviews, and an almost equal measure of 1 star reviews. There are 2’s, 3’s, and 4’s as well, but it seems that most people either loved it or hated it.

If I’d finished it, is there a possibility I would have enjoyed it more? I never want to be like those people who trash a book they haven’t even read, based on what they heard about it. If I’m going to offer an opinion, it’s on what I actually did or did not experience.

For that reason, my inclination is not to review it on Goodreads. It just doesn’t seem fair.

Maybe Goodreads needs a “DNF” button so that people can see, in addition to the average rating, how many people abandoned the book. It seems like that would say a lot.

What are your thoughts on this?