I do love a good villain, one with their own story, who you can even sort of understand and root for. So many villains are one-dimensional and boring. When they’re not, they’re often the best part of the book.

Hannibal Lecter in Red Dragon, Silence of the Lambs, and Hannibal, by Thomas Harris (horror): I loved Hannibal Lecter the moment he said he liked eating the rude. I think of that often in the grocery store. He appealed to me because of how manipulative he was, like a chess master, using people as the pawns. These books would not have been as good with a lesser villain.

Gavin in Fearscape, Horrorscape, and Terrorscape, by Nenia Campbell (YA horror): Before I get to the review part, I need to be honest about these books. The first one was fantastic, but quality went downhill as they continued. I still liked them a lot by the last one, but the last two would have benefitted greatly from better editing. (I think the second two were self-published. If they were ever re-edited and re-released, I’d definitely buy them.) Okay, so anyway… Gavin is a creepy stalker who develops an interest in Valerian, despite her friends telling her to stay away. I loved these books because they didn’t make the bad boy turn good with the influence of the right girl. He is a creep and that doesn’t change.

Nurse Ratched in One Flew Over the Cuckoo’s Nest, by Ken Kesey (classic): There’s nothing worse than someone who’s awful to people in their care. That’s one of the things that makes Nurse Ratched one of the evilest characters of all time. She’s a control freak, among other things, and McMurphy and his chaos are perfect foils for her. It’s a classic story.

Heartsick, by Chelsea Cain (horror): In my mind, there’s nothing better than a female villain (done well), and Gretchen is one of the perfect ones. She’s a serial killer who’s also a psychologist. She manipulates her way into working with police and then tortures the police detective in charge. Instead of killing him, she then lets him go and turns herself in, professing her love for him. But it turns out that it was all another manipulation, and she keeps manipulating him from jail, Hannibal Lecter-style. There’s a second book I haven’t gotten to, mostly because I didn’t know it existed. It’s now on my TBR.

Who are your favorite villains? 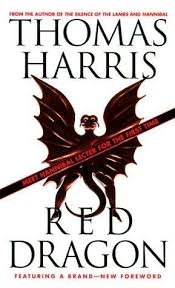 Red Dragon, by Thomas Harris, is technically part of the universe that encompasses Silence of the Lambs and Hannibal, though it takes place before either of those books.  It introduces Dr. Hannibal Lecter.

My absolute favorite character is Will Graham, who is a brilliant profiler who can get into the heads of serial killers.  This book kicked off a lifetime fascination with serial killers, and made me (for a long time) want to be an FBI profiler.  Ultimately, I didn’t go that direction with my career, which part of me has always regretted.

Red Dragon is about a man who believes that every time he murders someone, he is moving toward becoming “The Great Red Dragon.”  Will Graham is asked to come out of retirement to help the FBI catch him.

Will Graham is very good at his job, but he retired because connecting with the monsters in that way became too much for him.  The price was too high.  I’d never thought of people like him being tortured by their talent.  It made me wonder what secrets people keep behind their masks of competence.

This may also be the first book I read where the bad guy is sympathetic, and even likable at times.  Yes, he’s clearly insane.  Yes, he’s dangerous.  But he’s also tortured, complex, and has redeeming qualities.  It made me want to understand bad guys.

I love a bad guy who’s just pure evil, but I also love ones who are multi-dimensional.  Bad guys and good guys both have secrets and needs and whole other lives.

It’s a dark book, but if you enjoy this kind of thing and have never read it, it’s my favorite of the three.