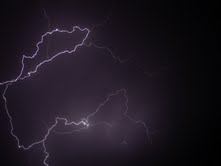 I love storms.  They’re the one thing I miss about PA.  We get good storms here in AZ, but they’re pretty rare.

Tonight was brief, but it was pretty great while it lasted.  We had booming thunder, blinding lightning, and pouring rain.  For whatever reason, I decided that I wanted to photograph the lightning.

I have a pretty decent camera.  My photographer-engineer husband picked it out for me, keeping in mind that I come at photography with more enthusiasm than skill.  It has a fireworks setting on it, and because of that setting, I was able to photograph lightning. 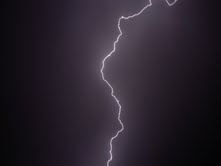 I’ve seen better pictures of lightning, but these are cool because they’re mine!  My method was simple.  I aimed at the sky and took 130 pictures.  Six of them have lightning in them, and I’m pretty proud of those. 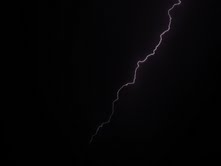 It occurred to me that my lightning picture taking method is similar to writing.  Sometimes you just need to aim, snap away, and see what takes.  I had to throw away 124 pictures of a dark sky, but because I was willing to just keep snapping away, I got some real gems.  In writing, it can be the same thing.  Just keep putting words on paper until you get what you want.  You may have to edit, but the raw product will be there, and you can’t do anything until you have a place to start.

Lightning, other than being a really awesome Dean Koontz book, is a beautiful and interesting force of nature.  I love standing outside on my porch during storms, watching the lightning and rain while listening to the thunder and wind.