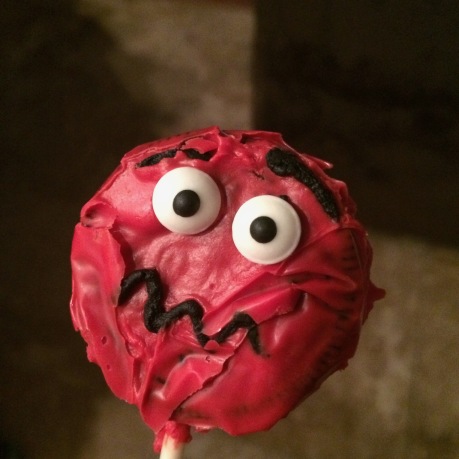 I was in elementary school when I got my first C on a test. It was probably math, because back then I thought I hated math. I got home from school, and sobbed because a C was clearly the end of the world. And my mom sat me down and explained that I didn’t have to be perfect.

I can’t count the number of times she told me that, but it never quite sank in.

I used to be a poor sport, throwing a quiet temper tantrum if I lost a game. Oh, I thought I was holding in my temper quite well, but everyone else knew I was being a big baby. (This was in my 20s.) Still, I’m generally good at everything, so people kept playing with me because I didn’t lose all that often.

Any criticism, even the mild kind, could make me fume for weeks. Because if someone criticized me, clearly they hated me and everything about me, right? The flip side of that is that if I said or did something I perceived as “wrong,” I could obsess over it for weeks as well.

One day, I was getting ready to go play games with my friends, and I thought back to the last time we played. I remembered eating and drinking, making silly jokes and laughing a lot. I remembered who was there and what we played. But no matter how hard I thought, I couldn’t remember who won.

And that was eye-opening for me.

I didn’t get over myself overnight, but that realization started the slow process. Whenever I started to take something too seriously or get upset about it, I’d just ask myself, “Will I even remember this in a month?” If the answer was no, I made myself move on.

Then I started participating in online critiques of my writing, and the old feelings resurfaced. I made myself put the critiques aside for a day or two before responding. And I found that as long as I didn’t respond right away, I could get over my hurt and see that much of the critique was helpful. Not all of it, of course. Sometimes criticism is just a difference of opinion, and I didn’t have to go with it. But if I assumed that everyone who criticized me was coming from a place of genuinely wanting to help me, it made the criticism easier to take.

I know that not everyone wants to help, and that criticism can be malicious. But it’s not my job to sort out other people’s emotions. I just assume everyone has my best interests at heart, and move on. Other people’s negativity doesn’t have to affect me, unless I let it.

It wasn’t until I was in grad school to be a counselor that I realized how much progress I’d made. We all had to tape ourselves doing “counseling sessions” with other students, and then get feedback from our professor in front of the whole class. I really respected this professor, and desperately wanted her praise. But when she saw my video, she picked out all the areas where I could improve.

I felt myself turning red, and those old feelings of having to be perfect wanted to come to the surface. But I told myself to pay attention to what she was saying, really listen, and think about it later when I had time to decide how to feel, and if it was helpful.

When she was done ripping my counseling session to shreds (that’s how it felt, though it probably wasn’t reality because she is a genuinely good human being), one of the other students said, “Wow, that was really amazing. How could you just sit there and take all that criticism? I’d be in tears.”

I took a deep breath and said, “Well, this is where we’re supposed to mess up, right? I’ll learn more from my mistakes than my successes. This way, when I get into the real world, I won’t hurt anyone, and I’ll do it right.” And that tight ball of tension inside me dissolved, because I realized that I meant it.

Criticism is still hard to handle sometimes. And of course, I love praise for a job well done. But regularly attending a writer’s group and having consistent critiques has been a wonderful asset to working on this aspect of myself.  That criticism doesn’t hurt, most of the time. Sure, once in awhile, if I’m having a bad day and feeling emotional, those old feelings try to struggle to the surface.

But I mostly tell them to shut up.

If I’m really having a bad day, I know who I can text to rescue me from negative thoughts. And I also try to write compliments and positive feedback into my journal, so if I’m struggling with negative thoughts, I read over the things people said to me that made me feel good.

And I remind myself not to take it all so seriously. It’s just life, right?

How do you handle criticism?