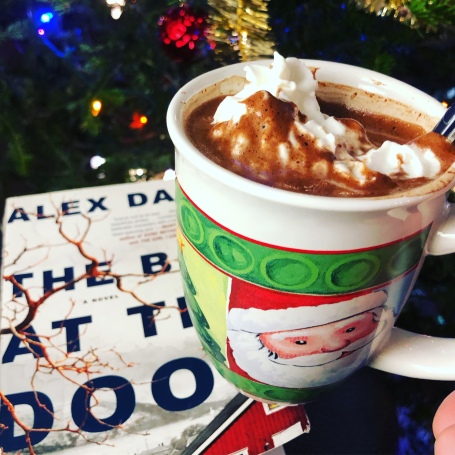 I recently read The Boy at The Door, by Alex Dahl, to fill a “Nordic noir” category for a reading challenge.

As I was trying to pick out a book, I read some Goodreads reviews, hoping to get a sense if I’d like the book or not. And what was interesting to me was how many people said they hated the main character, Cecilia.

A quick, spoiler-free summary is that Cecilia is asked to take a boy home from swim practice one night, only when she gets to his house, it’s obviously abandoned. So she brings him home, and from there, a series of events happen that threaten the “perfect life” she’s created for herself, because that life is based on lies.

I can see why people didn’t like Cecilia. She’s selfish, manipulative, unapologetic, a complainer, and a perfectionist.

But she’s also pretty open and honest with the reader. There are reasons that she is the way she is. She’s also kind of vulnerable, wanting to keep the life she’s so carefully crafted.

As Cecilia’s secrets were revealed, none of them surprised me. Yet I felt increasingly sorry for her as this life she’d crafted fell apart.

It got me to thinking about how a lot of people probably would feel that the “bad guy” got what she deserved, and on one level, that’s probably right. Actions have consequences, and everything that happened to her was a result of the terrible choices she made.

On the other hand, she never meant to hurt anyone. She was only thinking of herself when she did things, which is not an enviable trait. And yet, it’s clear that she didn’t think through the consequences of her actions. She was just so terrified to lose what she’d built that she was in constant reaction mode.

I’ve always found the saying, “The road to Hell is paved with good intentions” to be an interesting one. While that’s undoubtedly true, it’s also paved with bad intentions. Why don’t we get any credit for our intentions? Why do others tend to judge us based on the worst thing we ever did? We all make mistakes, so why can’t we be more forgiving of the mistakes of others?

I didn’t like Cecilia. I wouldn’t want her as a friend or as a relative. But reading this story, I absolutely felt sorry for her and hoped that things would work out for her in the end.

Have you ever disliked a character but hoped they’d have a happy ending?

(And incidentally, if you want to try Nordic noir, I absolutely recommend this book.)