It’s always fun for me to see my most popular posts. There were a few posts on this list that surprised me, and a few I’m just happy to see other people seemed to like as much as I did. The content varies so much that I still have no idea what I should write more of and less of… I guess I’ll keep using the spaghetti method, throw things on the wall and see what sticks.

I passionately love this book. I’m always against censorship, but this is a book I wish had been around when I was growing up.

Apparently, I’m not alone in my love of these things.

This has been one of my most popular posts ever since I wrote it back in 2011.

Our Dark Duet- A Review

This is the sequel to This Savage Song, and I have strong feelings about them both.

“Master Yoda, Is The Dark Side Stronger?”

My philosophical musings on good vs. evil.

12 Responses to Excuses About Why You’re Not Reading

I’ve seen a lot of posts about “how to read more,” but for me, what it boils down to is, we do what we prioritize.

I Highlight in Books, But Only Monsters Dog-Ear Pages

I’m glad that people are so interested in books on mental illness.

I didn’t expect to enjoy this book as much as I did.

Hello, and welcome to Blogging A to Z 2017! Thanks for stopping by. Fellow A to Z-ers, please make sure to leave a link to your blog in the comments.

My theme this month is 26 of the Best Characters in Fiction.

There aren’t many characters whose names start with “Y.” In fact, I could only come up with two: Yoda and Yorick. And though I’ve been known to throw out the quote, “Alas, poor Yorick, I knew him Horatio,” I don’t think being a skull in a soliloquy qualifies as a great character.

Luckily, I actually like Yoda and think he’s a legitimately great character. Full disclosure: I used to read Star Wars books when I was a teenager, but I don’t remember if Yoda was in them. So my saying that he’s a great character is based on the movies.

In science fiction and fantasy, there’s almost always a wise old sage to teach the main character how to be whatever they are. As a sage, Yoda is an unexpected one (at least I assume I was surprised the first time I saw the movie… it was a long time ago). Luke doesn’t even know who he is when they first meet because Yoda engages in silly and annoying antics to see what Luke is like.

When Yoda does get serious though, he’s quite good at what he does. He’s able to use and manipulate the force, showing Luke that it can be done. While I’m a fan of the original trilogy and have little use for I, II, and III, the lightsaber scene with Yoda against Count Dooku in Attack of the Clones is one of the best scenes in all the movies.

All these qualities: the ability to play dumb when it suits, throwing out lessons, being able to mop the floor with an opponent, are all qualities of good sages. One other quality that I think happens often (though not always) is the mentor reluctantly taking on the apprentice. Yoda just wasn’t sure of Luke in the beginning, and told Obi Wan that.

Even though he is pretty standard, Yoda is still one of my favorite mentors. Maybe it’s because of his small stature. I’m short, and everyone always underestimates me too. It just goes to show that size doesn’t really matter for much.

A friend of mine is being bullied.  Yes, adults can be bullied.

I’ve never met the bully, but from what my friend (who I’ll call Ash) tells me, the person is a really awful human being.  The therapist in me says the bully must have suffered terribly in their life.  The friend in me just wants to slap the crap out of them.

My husband and I recently decided to rewatch Star Wars.  We like to do this once a year because they’re awesome movies, but we were probably inspired by the trailer for Episode VII.  If you haven’t seen it, click here.

In any case, Luke asks a question in Star Wars: Episode V, The Empire Strikes back that has always bothered me.  He asks, “Master Yoda, is the dark side stronger?”  And Yoda answers, “No, no, no. Quicker, easier, more seductive.”  In my mind, Yoda never explains what makes the light side stronger, and it doesn’t seem stronger.  Yoda, the most powerful Jedi in the movies, is beaten by the Emperor in Episode III and forced into hiding.  The Emperor would have beaten Luke in the final showdown in Episode VI, had Darth Vader not intervened.

I’ve thought a lot about this as Ash talks about being bullied.  Ash has information that could really hurt the bully, but has hesitated to use it because Ash is a good person.  The bully has lied about Ash and turned some of Ash’s friends against him.  Now, we all know that friends who turn so easily with lies weren’t really friends to begin with, but it still hurts.  Ash has started to wonder if getting revenge would be a good thing.  After all, this bully seems powerful, and why not meet fire with fire?

I know revenge is a bad thing, and going down the same path as someone who hurts others is a bad thing, but there are times when it seems “right.”  Probably because it’s quicker and easier, and even more, it’s seductive.  Getting revenge on others seems “fair.”  Maybe it even is fair, but fair doesn’t make it right.

I asked myself why the dark side isn’t stronger.  It seems stronger; the Emperor won against everyone who went up against him.  He won against Yoda by sheer force, and he beat Anakin by seducing him into becoming Darth Vader.  To answer the question, I thought about why Luke “won” against the Emperor.  Darth Vader says that Luke can defeat the Emperor, that the Emperor had “foreseen it.”  But Luke is nowhere near powerful enough to beat him.  In fact, in Episode VI, it’s not even much of a fight.  But then the answer was so simple that when I saw it, I felt silly.

Luke won because of love and faith.

His faith in his father was so strong that he went up against the biggest bad guy of all time, knowing that he couldn’t win by force.  He had faith that there was still good in Darth Vader, and nothing shook him of that faith, not even the Emperor almost killing him in front of Vader.

But then I wondered about Anakin.  He turned to the Dark Side because of love, didn’t he?  Because of his fear for Padme.

You see, Anakin’s love for Padme was a selfish love, possessive and consuming.  Not only that, but the Emperor was able to seduce him because Anakin was convinced that he wasn’t getting a fair deal, and he wanted more more more than he was being given by the other Jedi.  He got a seat on the council, the youngest council member ever, but was pissed that they wouldn’t give him the title of Master.  Nothing was enough for him, and he was willing to hurt anyone in order to get what he wanted.  So it wasn’t love that changed Anakin; it was power and a quicker and easier path to more of it.  Love was an excuse to do what he really wanted to do anyway.

Perhaps in brute force, the dark side is stronger, but the light side will always have a trump card, and that is love (in the form of selflessness) and faith.  That is why the Emperor lost.  And that’s why evil will always lose.

And that is why, in the face of bullies, we should never stoop to their level.  I’d rather lose friends than pieces of myself.

Because the dark side may win many battles, but if the light side stays true, it will always win the war. 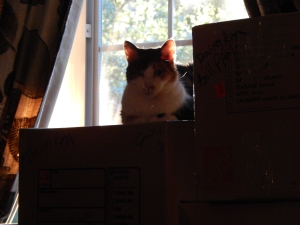